✔Ages: 6 years and above

The 617 pieces are accompanied by a thin instruction booklet (lacking the architectural and historical information the Moc booklet would include) and the latest addition to my collection of giraffe brick separators. The set is small enough that it does not require building stages of numbered bags. This is a good set for a rainy day build or a lazy afternoon build. Just small enough to build in a brief time span but large enough to be interesting and enjoyable, with some clever designs and building techniques utilized throughout.

Interestingly, the wall begins as this sandwich of 4×4 plates with a hole in the middle:

As building on a symmetrical base such as a rectangle could make building upwards a bit confusing, the design includes some colour-coded cues to which side you’re building on, on the base level. The baseplate is, as with all Moc architecture sets, made up of a number of small plates connected. The whole base is bordered in smooth black tiles, including two with text in English and Chinese.

On the red end of the rectangle, we very quickly establish an unusual docking receptor with the capability to receive a hinge piece that will click into the two “grabby hands”. We’ll see a bit later what this is used for.

The instructions call for usage of either the English or Chinese nameplate, but I put one on each side of my Great Wall. Why not, right?

Construction of the mountain consists of dark green slopes of varying heights and slopes, all the way from the tiniest “cheese slope” wedge pieces to 4-tall 2×2 angled pillars. A few light green dots and trees (made of 2×2 circle plates) will add some accent to the mountain side throughout the build. The receptor we built at the beginning now has something to put in it, though at this stage it is still unclear how this will play into the overall design of the wall. But we know now that the upward facing portion has a ball joint on it.

The sharpest angles are masked, completely hidden from view (since there is a big gap in the bricks) by the wall’s towers, of which this segment boasts two. It’s a clever technique to allow the wall to have realistic-looking construction on the visible outside, whilst doing what’s necessary within the confines of building with bricks of this scale. I really had a lot of appreciation for the design that went into this set as I was building it.

About here is where we see that the ball joint will become the base on which the lower tower sits, at a roughly 45-degree angle to the baseplate. Because the real Great Wall curves quite a bit, because the mountains curve require it, having this tower offset at an angle adds a good touch of realism, especially as the wall segments twist their way both into and out of the tower. In this close up, one can see that the segments of the winding wall walkway are angled to each other with 1×2 slopes placed sideways. 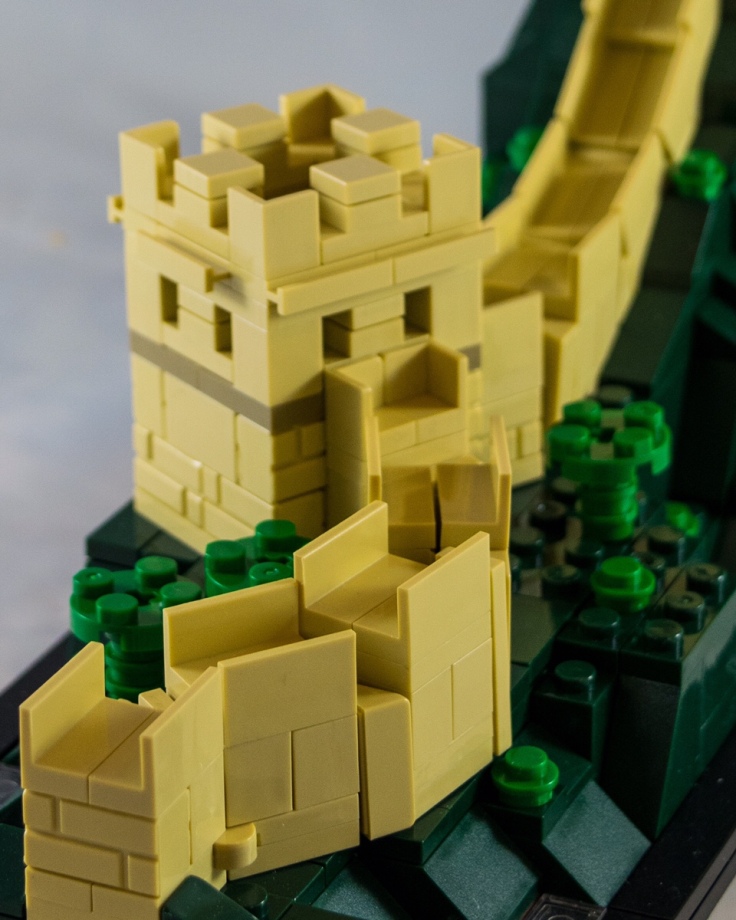 All in all, it was a pretty quick build: a couple hours including sorting and building at a leisurely pace. The finished product is really very beautiful. As former American president Richard Nixon remarked (upon visiting the original wall), “this is a Great Wall” indeed.

As the shots below show, each side of the mountain is flat, and you can also see upon closer inspection that the baseplate has a 1-stud wide segment on each end of the baseplate. These are connected to the large center section with wedge plates, allowing them to independently be removed from the base. Along with the flat edges of the mountain, this permits one to place as many of these sets side by side as they would like, with the ability to therefore build a wall as long as you could possibly want to. It’s really a very clever feature, and a good idea. I’ll be watching the web to see if anyone goes crazy with this and builds a super-long Great Wall of bricks. If one wanted to do so, the Lepin price for this set makes it a lot more palatable than otherwise. 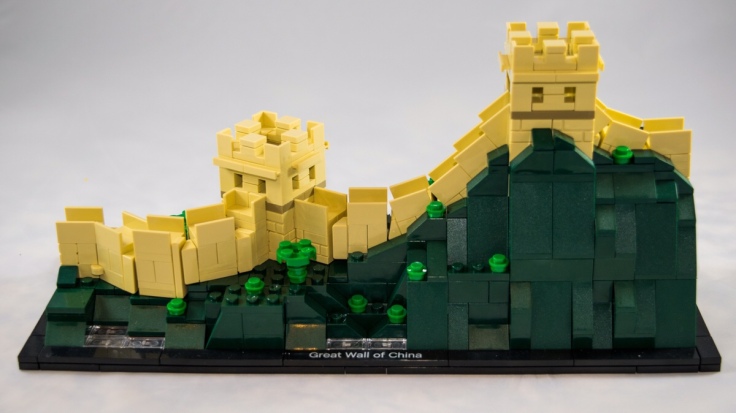